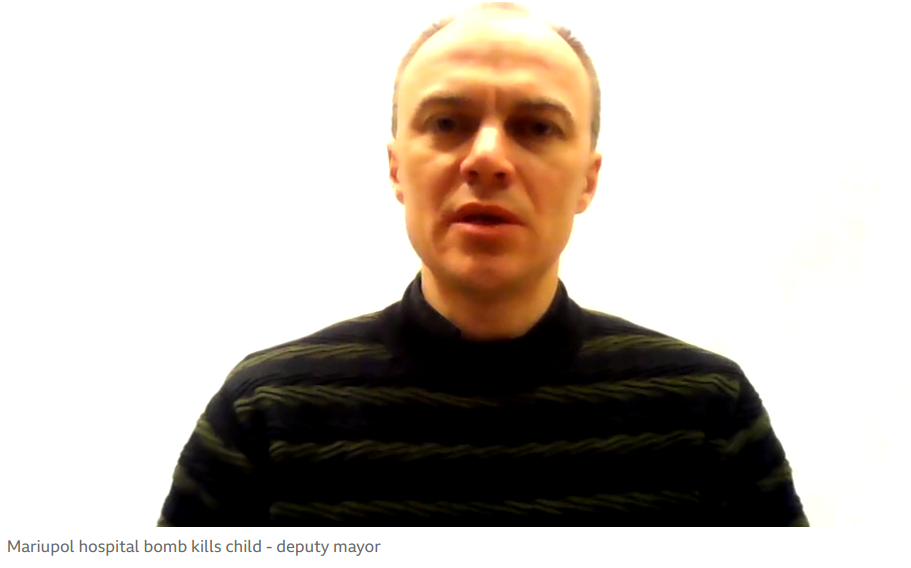 The BBC, which so very recently helped sell the fake Covid-19 pandemic, is now selling fake stories from Mariupol in south-eastern Ukraine. It never reported on the way Mariupol was taken by the fascists.

In cahoots with the rest of western media it puts out clearly fabricated stories to support one side (Kiev) of the Ukrainian crisis. Remember, this is the same BBC that sold us Tony Blair’s “weapons of mass destruction”, the great 2003 lie.

Dispersal of false information has become the modus operandi of this state-controlled propagandist broadcaster which once had respect. But now BBC, there is blood on your hands. Ukraine was at peace before your intervention.

Before the start of this war, which was long, long before the Russian invasion, the BBC was among media outlets that relentlessly pushed for the overthrow of the legitimate government of Yanukovich in late 2013 early 2014. Its brainwashing succeeded. After that coup, initiated from the US embassy, the fascist AZOV battalion was backed by Poroshenko who waged war on his own people in eastern Ukraine.

The BBC went silent. Why? Why stay silent when there was so much murder of civilians in the civil-war for which this worthless excuse for a broadcasting company lobbied?

Russia in 2019 filed a report from its Geneva Embassy depicting war-crimes in the Donbas region. It is only 3 minutes long, but 3 minutes of purgatory and grief. The poor people relentlessly bombed by Ukrainian forces in a war, which could have gone on forever without Russian intervention. It had already gone on for eight years.

For those of us who have followed the conflict from the start these images are not unusual. Do not think for a minute that war-crimes in the above video are isolated incidents. The White Book on Ukrainian atrocities is 320 pages long with some very disturbing images that will haunt anyone with a soul. Published in 2015 it covers just the first year of the crimes – which remember the good old BBC chose to ignore then – and now.

One image from the White Book that troubles me is of this dying woman, Inna Vladimirovna Kukurudza, because I remember the Russia Today (RT) report at the time. It was 2 June 2014 and the clip below is from the video used in that report. Dead bodies were all around, eight in all. Inna knew she was dying, and she asked for a phone to speak to her daughter.

47 year old Inna Vladimirovna died in the ambulance on her way to hospital.

Three days later Vineyard of the Saker reported on the earlier taking of Mariupol by the fascists.

The BBC was not there. But as shown in the second link some of the killing was caught on camera. The port of Mariupol was taken by Poroshenko’s fascists – the way Hitler’s forces took over the Sudetenland three quarters of a century before. They have been there ever since.

The citation for that observation linked to a BBC article about alleged invasions by Russia. Right at the very end of the article it says: “Russia has consistently denied sending troops and equipment to support the rebels fighting in eastern Ukraine. However, the rebels have admitted being helped by “volunteers” from Russia.” The BBC knew it was a lie.

In similar manner with Thursday’s article about the shelling of a hospital in Mariupol it has, again right at the end, finished with a totally outrageous claim by the Deputy Mayor of Mariupol:

“Deputy Mayor Orlov said at least 1,170 civilians had been killed in the city since Russia began its bombardment, and that 47 people there were buried in a mass grave on Wednesday, although those figures have not been independently verified.”

Yes, the ridiculous figures have not been verified. And there was no attack that day.

The cover image is from the BBC article and shows the Deputy Mayor of Mariupol, Sergei Orlov, lying through his teeth