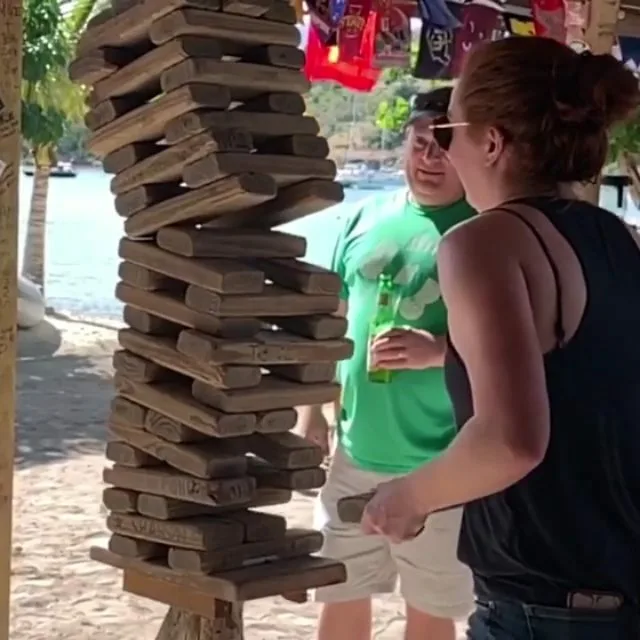 This is for people who do not know how to apply basic physics to real events – including it would seem – NIST (National Institute of Standards and Technology).

Look at the Jenga tower in the picture. There are gaps everywhere where the wooden building bricks have been removed. Yet it still stands. You can see it is going to fall soon depending on which wooden brick is removed. One thing is certain too. It is not going to fall straight down into its own footprint.

Having written so much about why the twin towers and building 7 could not have collapsed the way they did makes it difficult to think of a new approach. Getting through to people who blindly accept the US government story, even though it defies science, is like trying to convince – often the same people – that the Covid “pandemic” is a scam.

In experiments I have previously shown how two and a half beer-cans would equate to the same proportional height as one of the twin towers, without the twin-towers core-column and floors. I have demonstrated how bricks many times the mass of beer-cans are unable to cause a beer-can collapse – even with a gash in the side of the can. I have shown how beer-cans can support the weight of a child. I am drunk with trying to explain to the gullible who are unable to give a sober explanation of why I might be wrong. I have proved the incredible strength of steel structures. And the oldest iron-framed building in the world is still standing after more than 200 years.

If people (especially engineers) still don’t get it that the official story of 9/11 is a lie, they do not understand the laws of motion. Sadly, there is little hope for them.