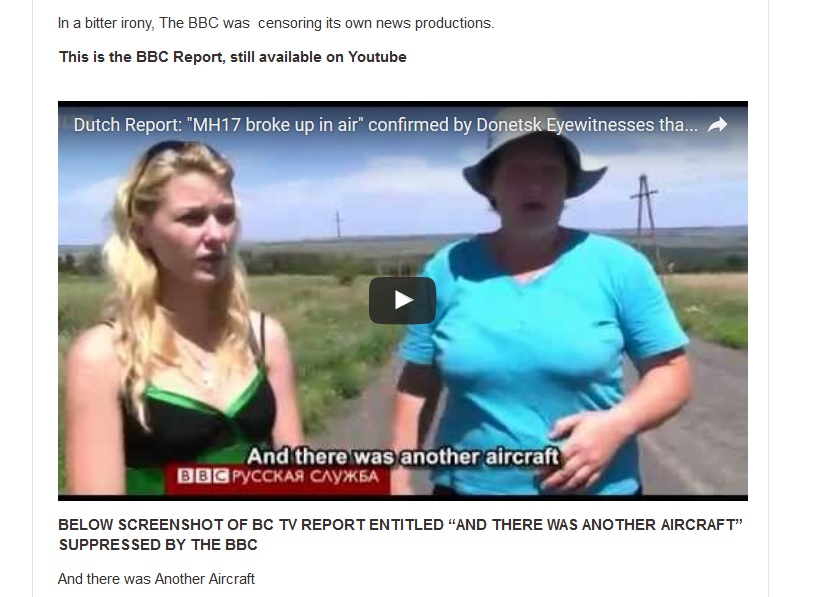 Earlier today I was reading a short piece by Luciana Bohne in which she states that the Obama administration brought about regime-change in Ukraine. I know this is true, not just because Obama has admitted it, but because I saw the video of a Ukrainian parliamentarian Oleg Tsaryov say that Geoffrey Pyatt was organising this coup from the American Embassy in Kiev through a private organisation “Techcamp” three months before the coup took place.

What caught my eye was a comment which included a video link from BBC Russian correspondent Olga Ivshina in which she interviewed residents in the area where passenger plane MH17 exploded. This is a screenshot of the link.

When I clicked on it the following message appeared:

I had seen this report at the time the BBC first broadcast it. However it was removed from later News reports. Caches of the report exist and I am indebted to a colleague who supplied me with this one.

Nevertheless the BBC, I believe, has some explaining to do. I have sent a freedom of information request to give the BBC the opportunity to respond to some pertinent questions. My request entitled MH17 Catastrophe reads:

“Can I respectfully ask under FOI why any link to the report by BBC Russian correspondent Olga Ivshina tells me that it is not available in my country due to copyright law. I live in the UK where the BBC has its headquarters.

The report by Olga Ivshina who was in the Donetsk region includes interviews with eye-witnesses who saw another plane alongside MH17 and reported that the passenger plane broke up in mid-air.

My requests therefore are:

Why is the BBC suppressing this report by a BBC foreign correspondent?

Is there an agenda regarding the shooting down of MH17 which prohibits reports that do not fit the agenda?

In this era when Fake News is getting so much media attention is the BBC, by sin of omission, putting a deliberate slant on news concerning MH17?

Has the BBC sent this report to the Joint Investigation Team?

I would appreciate answers to these questions.